InSIS staff will be convening three panels at the on  at the ASA2018 conference in September:

Creative Environments, Social Minds
Convenors: Christopher Goldsworthy (InSIS) and Kåre Poulsgaard (InSIS)
New approaches in cognitive science and the philosophy of mind is leading cognition outwards into the world with the idea that mind is not the stuff of isolated individuals, but is relational and emergent so that collective and environmental factors fundamentally shape our ability to think and act. In these approaches, mind is embodied and reaches across social, material and biological environments. Cognition rests on dynamic interactions between people and these environments negotiated through creative practice. Theories of embodied and enactive mind consider this productive intermingling of people and their environments to show how situated practice comes to shape cognition in both transient and durable ways. This relational approach assumes that cognition is contingent, creative and inextricably entangled with our surroundings. Highlighting questions of stability, novelty and change, this interactive framework can help explain the sociality of mind to show how shared dispositions of varied scope and durability develop, are maintained and change through shifting synthetic and social environments.

Bridging social, material and biological environments, we invite scholars across anthropology, STS, philosophy, and cognitive science to discuss how people co-create relative stability out of the inchoate flux of events that surround them - and how this stability is constantly and creatively contested, manipulated and re-imagined in embodied and social practice.

Logistics, Time and Environment
Convenors: Scott Lash (Oxford University), Sophie Haines (InSIS)
Culture has often taken the form of gift exchange and - from the origins of industrial capitalism - of commodity exchange. But in our age of digital capitalism culture may be increasingly taking on the parameters of logistics. Logistics is not just a question of cultural mobilities; it is about the movement of things - material and immaterial, human and non-human - and the management of flows through operations, platforms and port(al)s, actor-networks; material infrastructures of instruments, telecommunications, concrete channels; and less-tangible infrastructures of tacit knowledge and standards.

What kind of transformations of time are taking place in logistics-culture? Is the previously linear/Newtonian time of the commodity being displaced by the self-causing time of the socio-technical system? Is phenomenological time ceding to the externalization of memory as software and hardware? To understand the geopolitics of contemporary initiatives (e.g. One Belt One Road) we need to look to the stakes of previous instantiations.

We will look at movements of information, migrants, capital, environmental resources, and other goods in a logistics-culture and its historical precedents. If a previous age saw the temporality of beings (Newton), and the phenomenological time of being, perhaps we should shift our gaze from being(s) and time to logistics and time.

Throwing together ways of being/meaning: Recursive anthropology at the cusp of a paradigm change
Convenors: Caroline Gatt (University of Aberdeen), César Enrique Giraldo Herrera (InSIS)
In recent decades academia has increasingly acknowledged that disciplines are in need of reformulation in order to transcend rigid distinctions between natural and humanistic subjects of study. In anthropology this has taken two distinct but related forms. There is an unprecedented interest in taking seriously the onto/epistemologies of the people we work with. Consequently, we are acknowledging that nonhumans are creative and make sense of the world. In these projects it is the very constitution of an emergent world that is explored.

While perspectives are widening, anthropocentrism is often barely displaced, preserving the illusion that certain forms of agency and semiosis, such as symbols, are exclusively human. Simultaneously, the emphasis on language in anthropology has been a barrier to taking seriously other onto/epistemologies. However, an earlier sense of the verb "συμβάλλω (sumbállō) — to throw together, to unite their streams when referring to rivers, and paths, to collect, to come together, to meet, to join hands, to twist ropes…" suggests symbols might be more widespread than human exceptionalism allows for. We suggest that the growth of emergence ontologies in academia enables the fruitful throwing together of ecological communities/communities of knowledge, such as indigenous ways of knowing and artistic practice, that were previously considered incommensurable or irrelevant.

We invite papers that, grounded in entanglements with other ways of being/meaning, explore what these may offer to the recursive re-creation of anthropology. How could anthropology reconsider its ecology of practice to take seriously other ways of knowing/being, whether human or other than human? 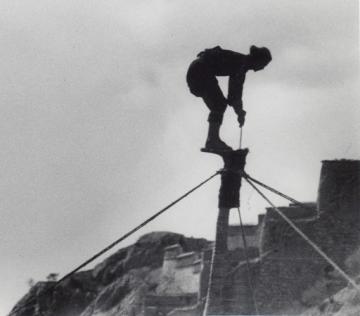 The Association of Social Anthropologists of the UK and Commonwealth’s 2018 conference will take place in Oxford on September 18-21 and will be hosted by the School of Anthropology and Museum Ethnography (SAME) of the University of Oxford.