Presentation Abstract:
The 21st century is the century of biology. While the realm of biology was (and still is) considered as “complex”, there are a number of initiatives attempting to convert biotechnology into a real engineering discipline. In synthetic biology, tools and processes are developed to make biology easier to engineer and to allow more and more people to design and produce biological systems. In the context of DIY science it comes as no surprise that these tools and processes are not only taken up by universities or industry but also by non-traditional players. By analysing the educational and professional background of the people who carry out DIYBio, looking at the different ways they organize their labs, and finding out what motivates them and what their goals are, we identify a number of guiding principles such as education, innovation, subversion and empowerment that all seem to be important for the community.

Presenter Biography:
Dr. Markus Schmidt  is founder and team leader of BIOFACTION KG, a research, technology assessment and art-science company in Vienna, Austria. With an educational background in electronic engineering, biology and environmental risk assessment he has carried out environmental risk assessment and safety and public perception studies in a number of science and technology fields such as GM-crops, gene therapy, nanotechnology, converging technologies, and synthetic biology.
He served as an advisor to the European Group on Ethics (EGE) of the European Commission, the US Presidential Commission for the Study of Bioethical Issues, the J Craig Venter Institute, the Alfred P. Sloan Foundation, and the EC’s Scientific Committee on Emerging and Newly Identified Health Risks (SCENIHR) working group on synthetic biology. He is the author of several peer-reviewed articles, edited a special issue and two books about synthetic biology and its societal ramifications, and produced – together with Camillo Meinhart - several documentary films. In addition to his scientific work, he engages in the collaboration between art and science, producing the BIO·FICTION Science Art Film Festival series (2011 and 2014), the art/design exhibition synth-ethic (2011), and Possible Tomorrows (2016) also engaging and supporting a number of artists to explore artistic and creative ideas on the future of biotechnology.
www.markusschmidt.eu
www.biofaction.com 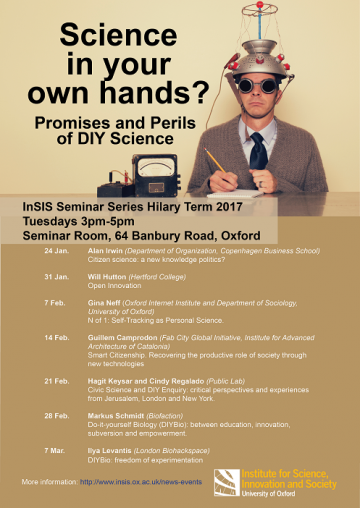